Cookie preferences
This website uses cookies, which are necessary for the technical operation of the website and are always set. Other cookies, which increase the comfort when using this website, are used for direct advertising or to facilitate interaction with other websites and social networks, are only set with your consent.
Configuration
Technically required
These cookies are necessary for the basic functions of the shop.
"Allow all cookies" cookie
"Decline all cookies" cookie
CSRF token
Cookie preferences
Currency change
Customer recognition
Customer-specific caching
Findologic
Individual prices
PayPal payments
Selected shop
Session
Comfort functions
These cookies are used to make the shopping experience even more appealing, for example for the recognition of the visitor.
Note
Statistics & Tracking
Affiliate program
Google Tag Manager
Track device being used
Account Service
How can we help you further?
Mo. - Fr. 8:00am to 6:00pm available
Email Support Call us* terms of use Service
*Free for calls inside Germany
Show filter » Hide Filter » 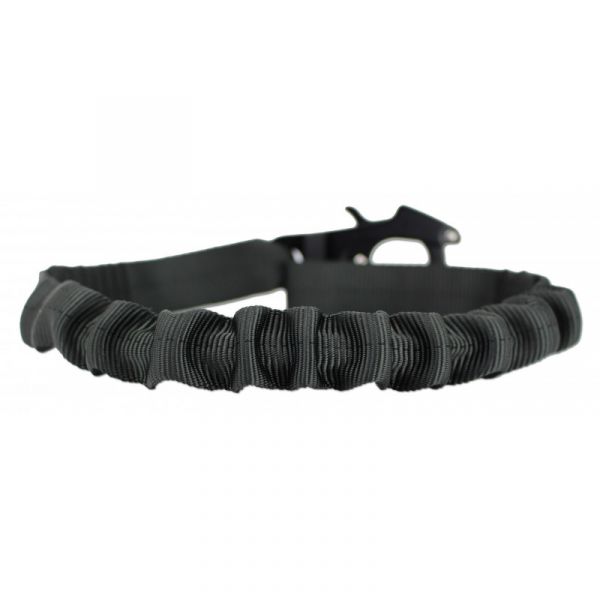 To the login »
Description Evaluations (0) Action Shots (0)
Description
Close menu
Information
The lanyard is versatile and can be used in a variety of locations in buildings and vehicles. It is also used as a short leash for service dogs because the elasticity of the webbing serves as a buffer against jerky movements. The Frog carabiner has an automatic closure and can be removed quickly however is secured against unintentional opening.
The middle piece is composed of an elastic core and overlying hose band. It is stretchable from 55-75 cm and the loops at each end are executed with 9 bolts.

Frog Carabiner:
- according to EN 362: Locking device against unintentional opening
- according to EN362-04: breaking load of 26 kN (personal protective equipment against falling - fasteners)
- according to DIN EN 12275: (mountaineering equipment - carabiner - via ferrata carabiner designed and certified for one-handed operation (CE and UIAA)

Tubular webbing:
- according to Milspec-Mil-W-5625K
- Made in Germany with a maximum load of 2000 kg

- Material: 100% Polyamide
- Length: about 55 cm, stretched about 75 cm
Properties
Evaluations 0
customer reviews (0)
Close menu
So far no reviews have been submitted. Are you satisfied with the product or have you noticed any shortcomings? Share your opinion and write the first review! You must be logged in to submit a review.
I'm a new customer
I'm already a customer.
Action Shots (0)
This product in action

What adventures have you experienced with this article?

Post your action shots and have the chance to win! The uploader with the best action shot wins an ASMC gift certificate in worth of 50 €.

further articles from Zentauron« back to Climbing Accessoriesall our brands
Viewed
This website uses cookies, which are necessary for the technical operation of the website and are always set. Other cookies, which increase the usability of this website, serve for direct advertising or simplify interaction with other websites and social networks, will only be used with your consent.
Configure Accept all